This next-generation 3U OpenVPX Development Kit is both SOSA™-aligned and 100Gb Ethernet capable, and is designed from the ground up to economically speed development of 100GbE Systems. 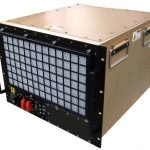 The WILD40/100 EcoSystem for 6U OpenVPX revolutionizes the OpenVPX environment with the addition of backplane 40/100GbE (FPGA IP included with board purchase) and hot-swappable payload and switch cards.