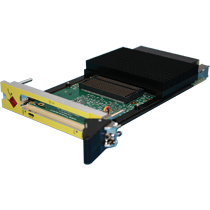 These FPGA boards include 1 Xilinx® Kintex® UltraScaleTM KU085 or KU115 FPGA with 13 High Speed Serial connections performing up to 16.3 Gbps.

In addition, there are 13 backplane HSS connections. With included High Speed Serial (HSS) FPGA cores (including 40GBASE-KR), there is up 20 GB/s of bandwidth on the VPX expansion plane which can go directly to other VPX cards, a switch or RTM, depending on backplane topology.  When using 40GBASE-KR, there is the added reliability of Forward Error Correction (FEC) to achieve a much lower Bit Error Rate (BER).

WILDSTAR UltraK FPGA boards are hot swappable allowing for more system reliability. This feature is unique to Annapolis and was developed because our experience with OpenVPX systems has shown it invaluable so a whole chassis does not need to be shutdown to remove a single board.